Photographer Who Captured Life and Death in Sarajevo

Salko Hondo, a veteran photojournalist for Oslobodjenje, the Sarajevo-based newspaper that courageously kept on publishing throughout the three-and-a-half-year siege of the city, went on his final assignment on July 16, 1992.

Hondo had been deployed to take pictures of people queueing for water near the marketplace in the Ciglane neighbourhood when a projectile exploded close to him.

“A grenade hit a pillar that was holding up an underpass in Ciglane, and a shower of shrapnel came raining down on him,” said Hondo’s former work colleague and friend Djuro Kozar, who was in the newsroom that day.

Hondo was identified from his bag, which had the word Oslobodjenje on it.

Former journalist Arina Sarac was also in the newsroom on the day the photojournalist was killed.

“He left and that was my last meeting with him… I didn’t know what happened. On the following morning I came to the newsroom. Before they could tell me what had happened, I saw a copy of Oslobodjenje on the table and Salko Hondo’s obituary in it,” Sarac said.

Hondo’s wife Nura had received no information about her husband’s death, so when he did not come home from work, she went to Ciglane to look for him. When she got there, she found out that he had been killed.

Before going to work, he told her not to worry about their daughter Azra, who lived outside Sarajevo and was expecting a baby at the time.

“It was our last conversation, as he was leaving to photograph that unfortunate water queue… He went out, but he returned and said: ‘Nurke, do not worry at all. Azra has all she needs for the baby – not just for one, but for three babies if needs be.’ That was the last thing he said,” she recalled.

Azra Hondo Subasic had fled Sarajevo because of the siege, and heard the news about her father’s death on the radio.

“On the day of his death, we turned on our radio and the first news we heard was: ‘Salko Hondo was killed today,’” she said through tears.

“I could not believe it. I remember it as if it was yesterday when I heard the news about his death. I heard on Radio Sarajevo that he got killed, unfortunately. I did not hear it from my mum or family, but on Radio Sarajevo…”

Hondo’s colleague, photojournalist Fehim Demir, learned about his death on the television news.

The day after Hondo’s death, Oslobodjenje published his obituary.

“Salko Hondo’s camera was loaded with a film that marked yet another day of war in Sarajevo. Lethal pieces of shrapnel prevented him from shooting the entire roll and completing yet another daily testimony of the Sarajevo war drama,” said the article published on July 17, 1992.

“The film will somehow get to the newsroom today, to demonstrate, in such a tragic way, that there are still people in journalism whose work outlives them. Hondo was one such journalist: for more than three decades, he used his camera to record the joys and sorrows of Bosnia and Herzegovina, leaving behind tens of thousands of photographs as an unparalleled testimony of those times,” it added.

Demir gave a speech at his funeral at Lav cemetery in Sarajevo, but couldn’t speak for long: “I managed to say three or four sentences, no more than that,” he recalled. “I seized up. Everything froze inside me.”

‘All of us are in danger’

Over 70 journalists and media workers, both Bosnians and foreigners, were killed during the 1992-95 Bosnian war. The first was another Oslobodjenje journalist, Kjasif Smajlovic, who was murdered in April 1992 in the newspaper’s office in the town of Zvornik.

No one has been prosecuted for any of their deaths. Indeed, the Bosnian state prosecution has not even filed a single indictment charging anyone who was directly responsible for the killing and wounding of thousands of residents of Sarajevo during the siege.

The Hague Tribunal found Stanislav Galic guilty of a campaign aimed at terrorising civilians in Sarajevo in the period between 1992 and 1994 when he was the commander of the Sarajevo-Romanija Corps of the Bosnian Serb Army.

Galic’s successor as commander of Sarajevo-Romanija Corps, Dragomir Milosevic, was also convicted by the Hague Tribunal of terrorising the civilian residents of Sarajevo.

The former Bosnian Serb political and military leaders, Radovan Karadzic and Ratko Mladic, were convicted of responsibility for a campaign of terror against civilians through sniper and artillery attacks on Sarajevo. Karadzic’s verdict is final; Mladic is appealing.

Salko Hondo’s former colleagues remember his dedication to his job at Oslobodjenje, which was one of the daily newspapers with the largest readership before the beginning of the war in 1992 – as well as his perennial sense of humour.

There is one anecdote about Hondo that is most popular among his Oslobodjenje colleagues – about when he irreverently addressed Yugoslavia’s all-powerful president-for-life Josip Broz Tito as he was leaving Sarajevo once after attending a ceremony.

“He greeted him, waved, and said: ‘Comrade Tito, goodbye, hope there won’t be any hard feelings,’” said Arina Sarac.

Hondo had photographed events throughout the former Yugoslavia for more than 30 years, ranging from ruling party congress meetings to the 1984 Sarajevo Winter Olympics.

“He was ready to do whatever was required for the newspaper right away, no matter where the task would take him,” his former work colleague and friend Djuro Kozar recalled.

Kozar said that Hondo first worked as a photographic lab technician developing rolls of film and then became a photojournalist. He was afraid of almost nothing, except grenades, Kozar recalled.

“It’s interesting, as he used to accompany me to artillery firing practice at Kalinovik, Manjaca and some other Yugoslav People’s Army training grounds, and he was afraid of grenades. He said: ‘I am afraid a grenade will kill me.’ I told him: ‘Salko, I don’t think that will be your destiny. All of us are in danger,’” he said.

Hondo’s daughter Azra remembered her father with both tears and laughter as she shared some childhood memories.

“I went to Vuk Karadzic elementary school. He once came to take some photos. There was some celebration, I cannot remember what exactly it was… When he took the photos, they asked him: ‘So, what grade is your daughter in?’ He did not know what grade I was in. Mum was so mad at him,” she said.

In the days that followed Hondo’s death, his last photograph of people queuing for water was published in Oslobodjenje, the one he took just before the explosion that killed him.

The photograph was accompanied by an article by journalist Vlado Mrkic, who recalled his last assignment with the photo-reporter.

Summing up his feelings, Mrkic wrote: “Life has always seemed like a dream, but never as much as today…” 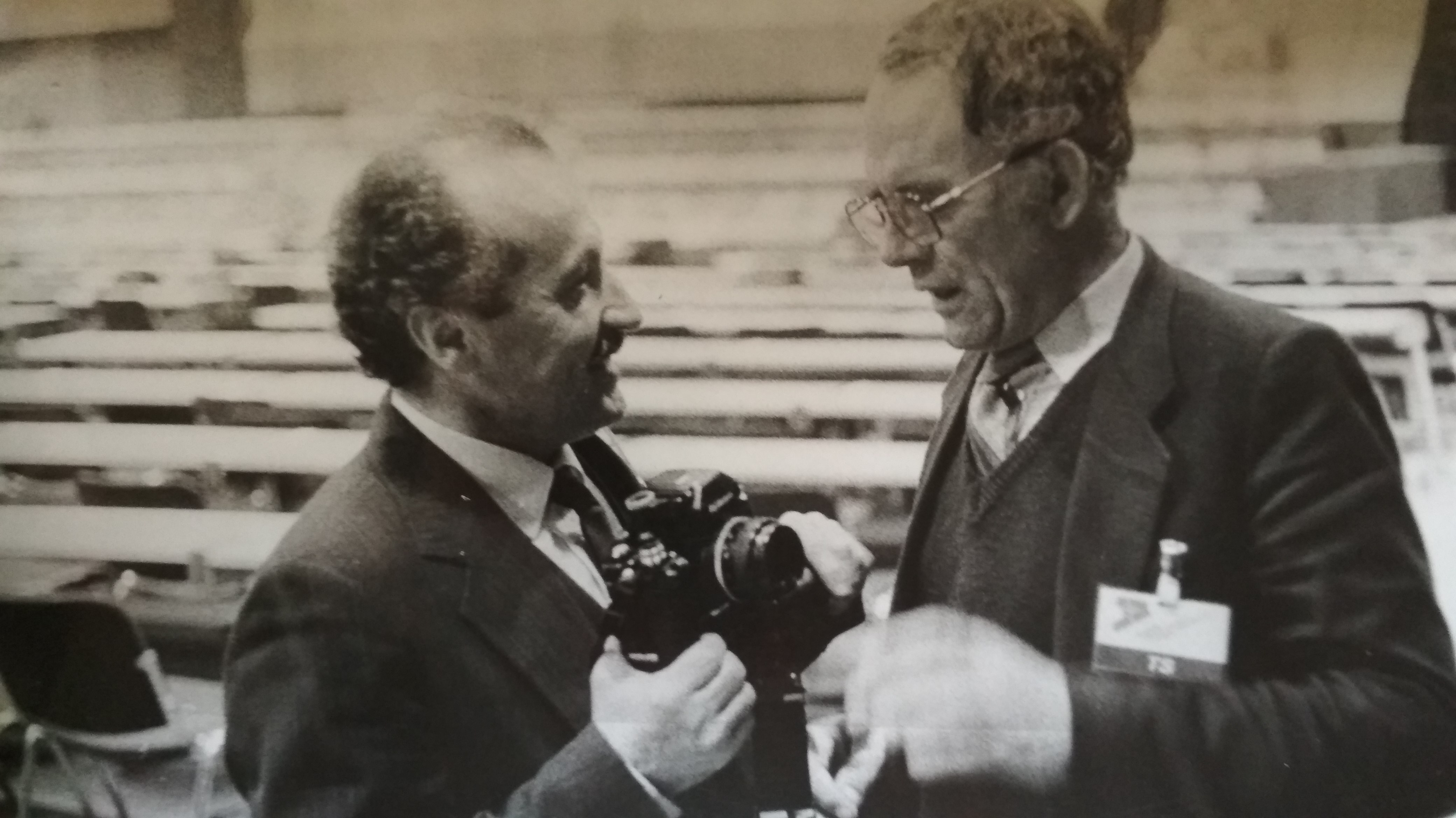 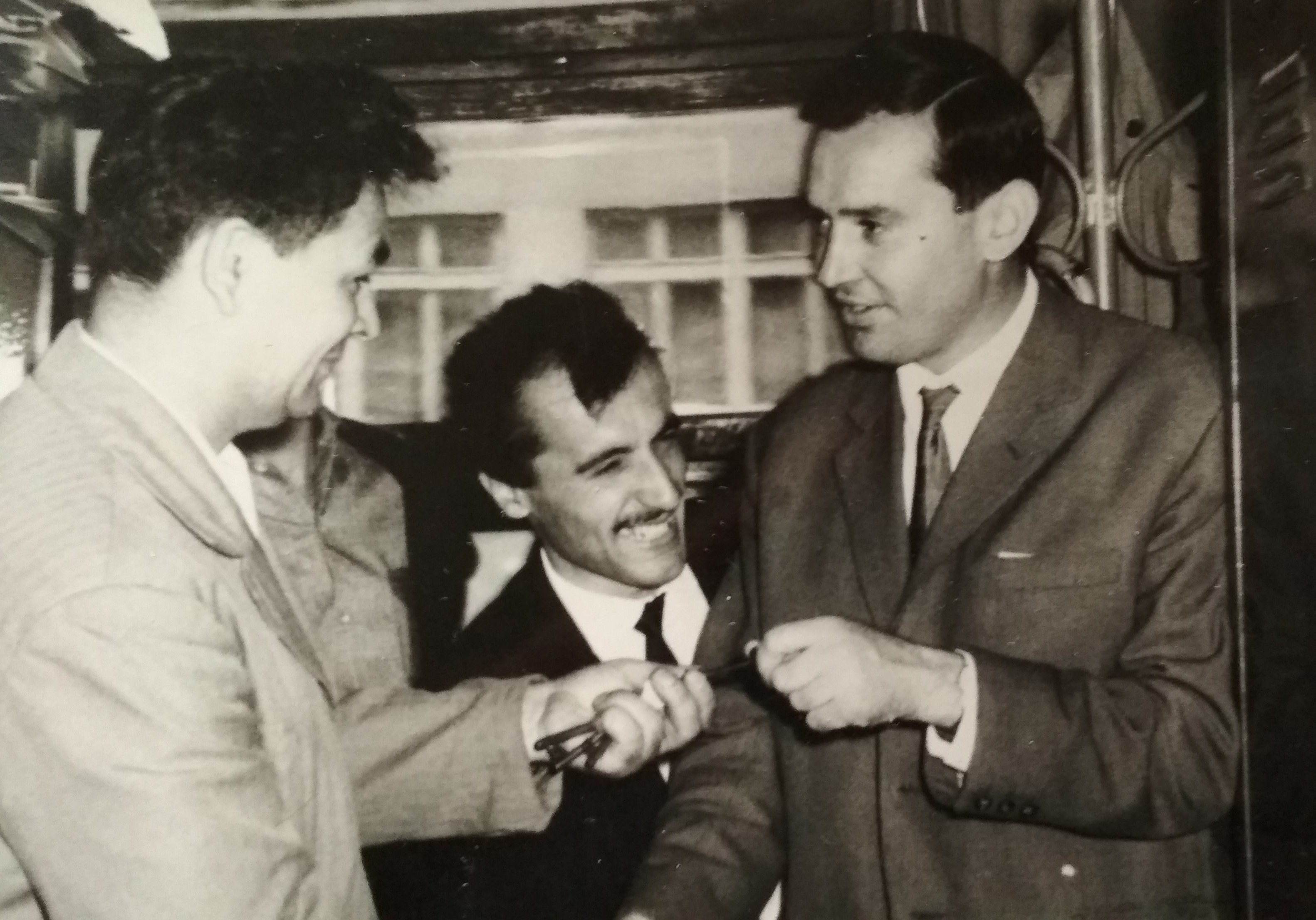 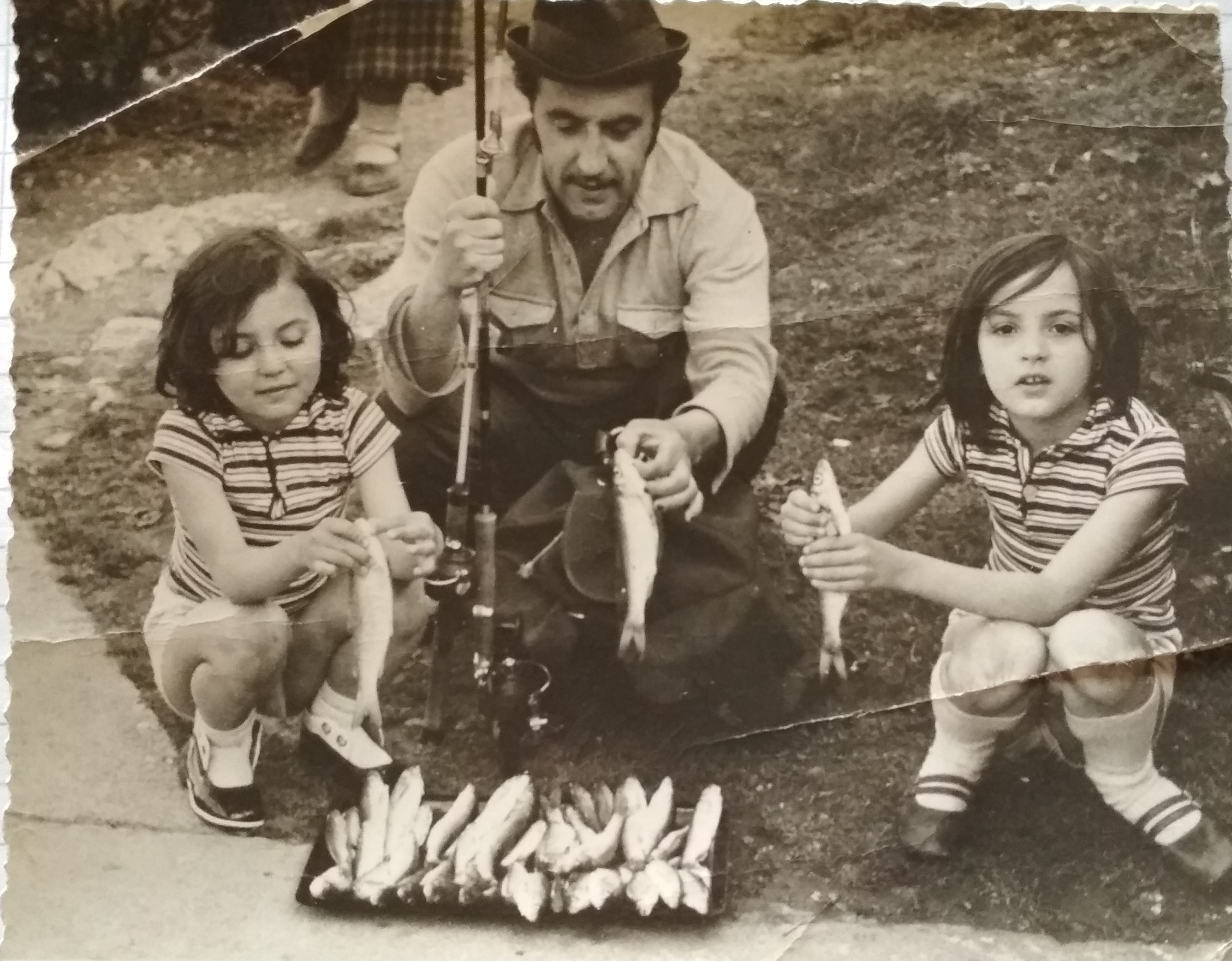 Hondo and his daughters Amra and Azra. Photo: Courtesy of Hondo's family. 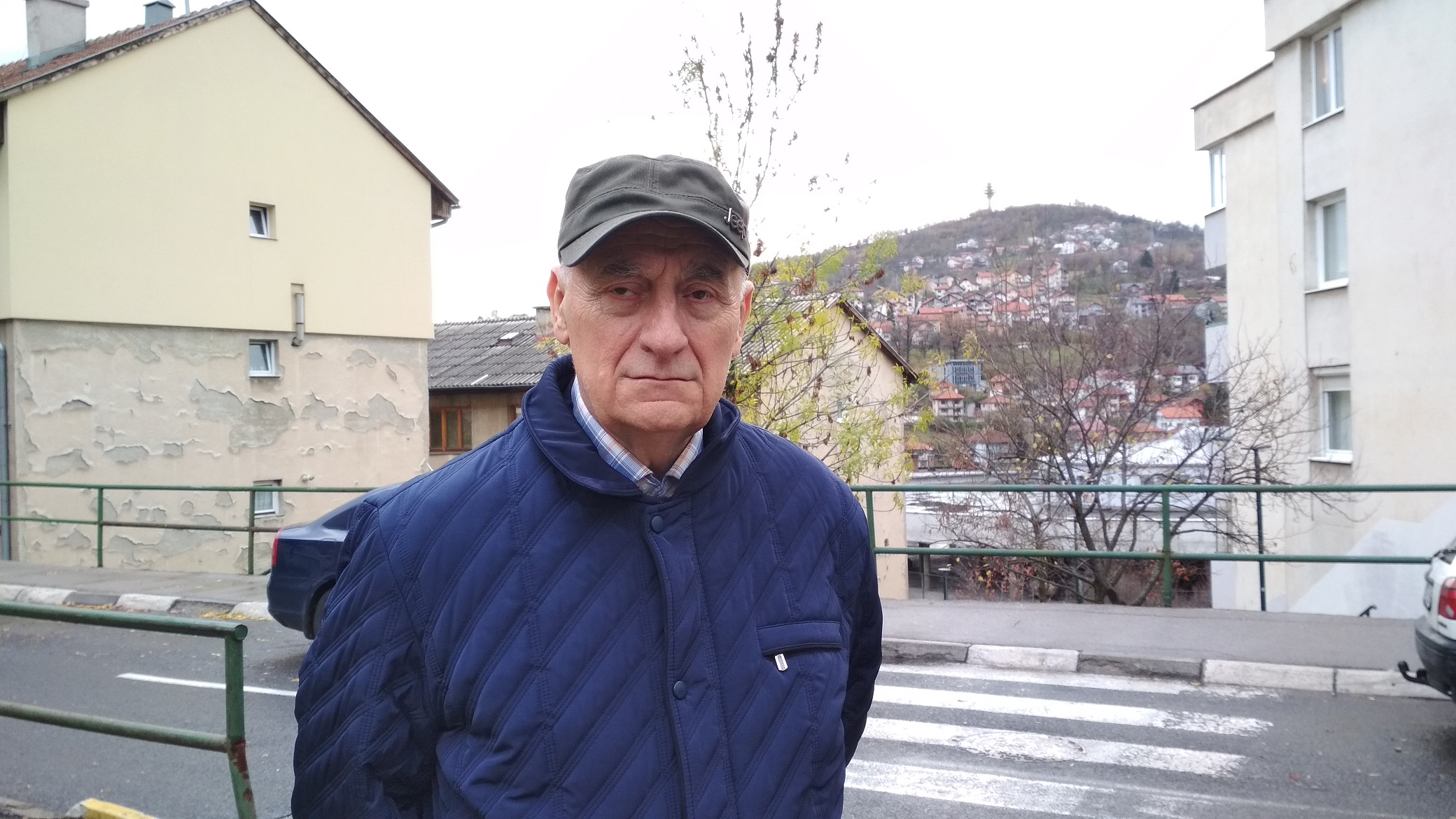 Hondo’s former work colleague and friend Djuro Kozar, who was in the newsroom the day Hondo was killed. Photo: BIRN 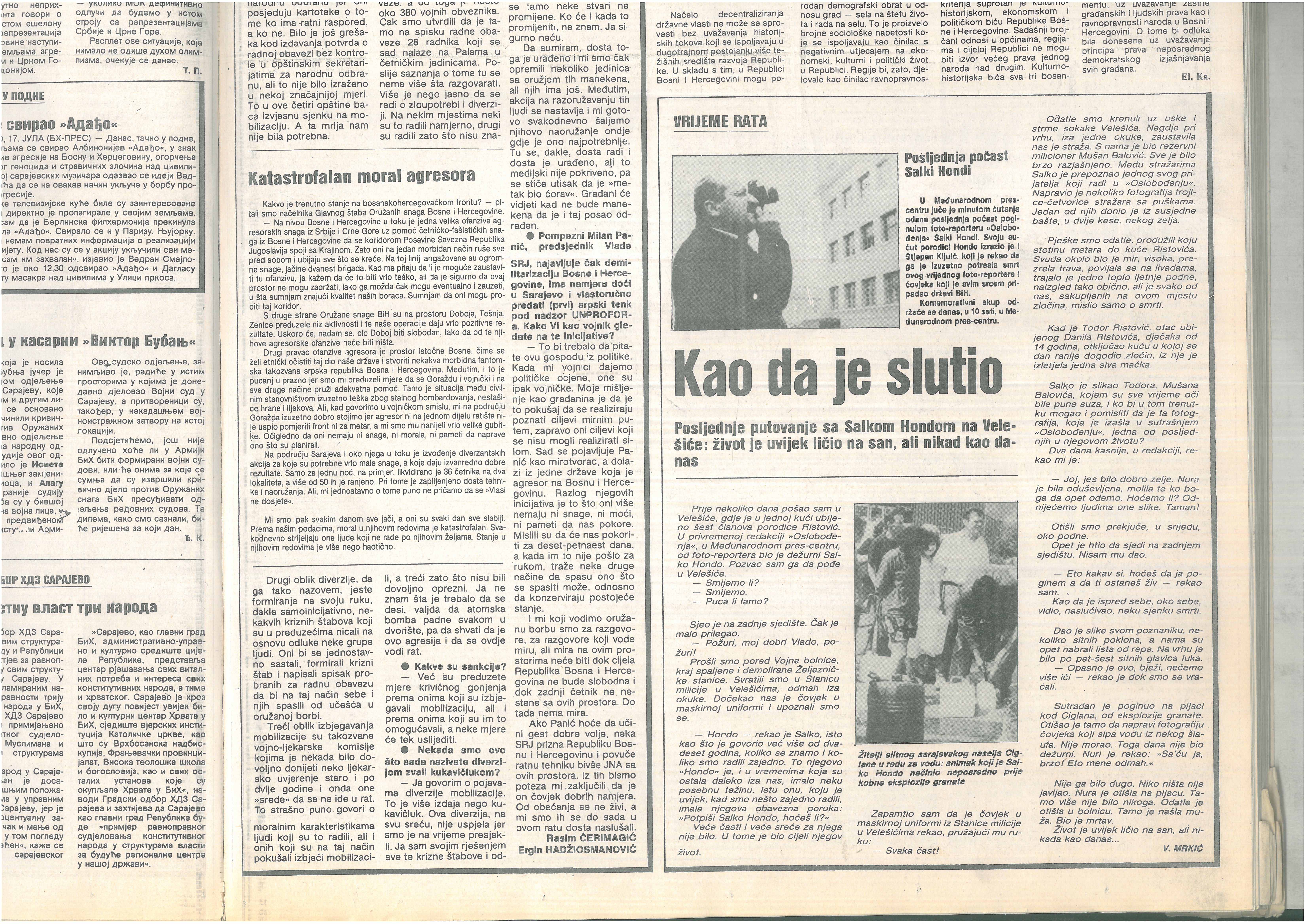 The last photograph Hondo took (bottom) of people queuing for water before he was killed. It was published in Oslobodjenje accompanied by an article written by journalist Vlado Mrkic, who recalled his last assignment with Hondo. Photo: BIRN 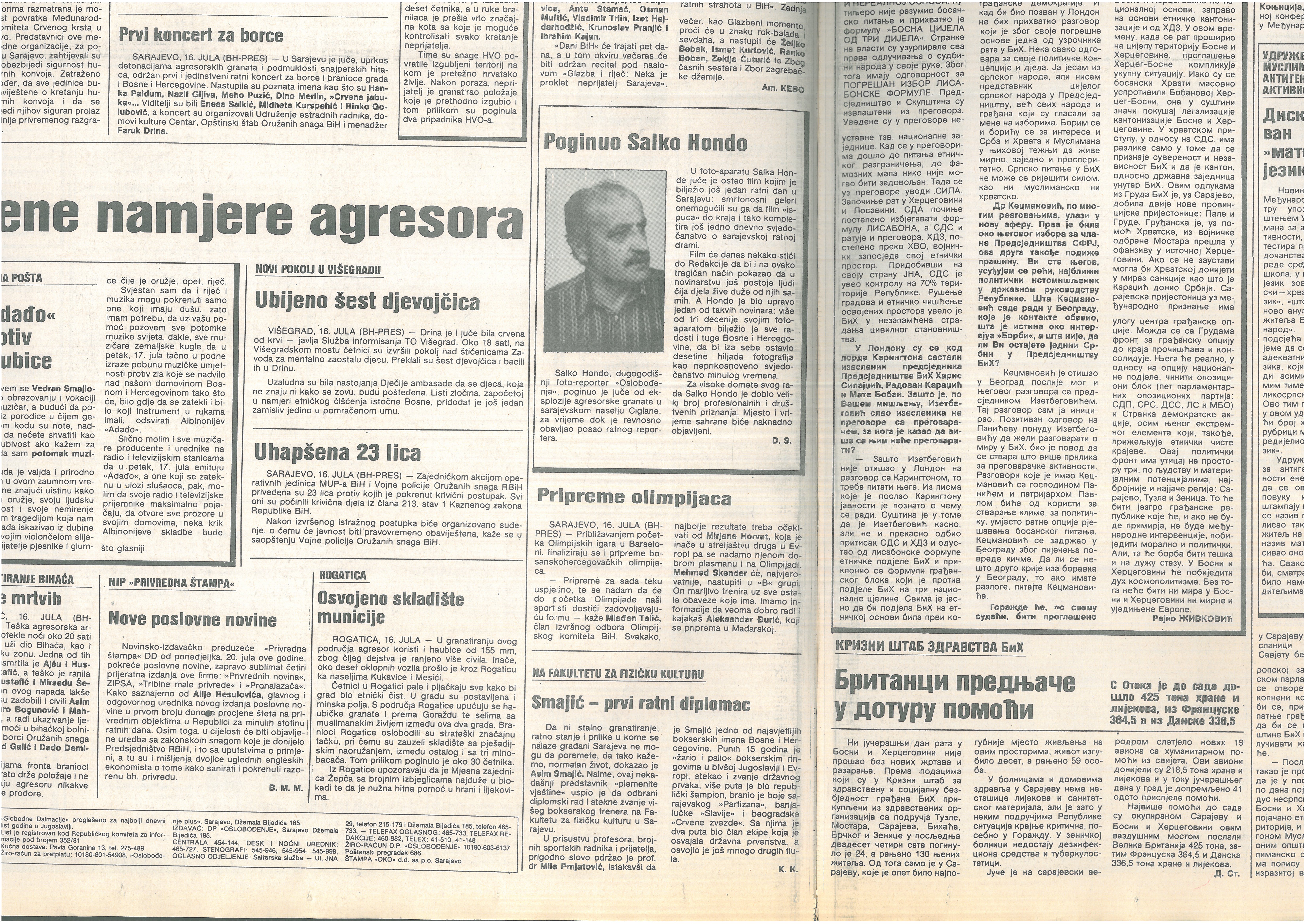 The obituary on Hondo published in Oslobodjenje the day after his death. Photo: BIRN